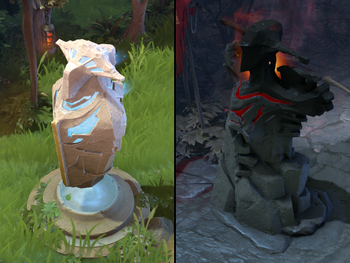 Towers are the main line of defense for both teams, attacking any non-neutral enemy that gets within their range. Both factions have all three lanes guarded by three towers each. Additionally, each faction's Ancient has two towers as well, resulting in a total of 11 towers per faction. Towers come in 4 different tiers: 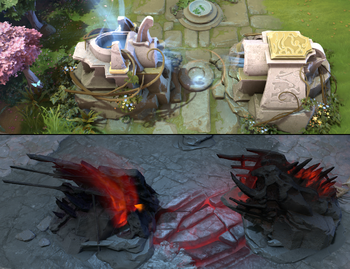 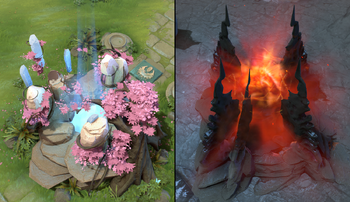 Fountains are buildings located in the respawn areas of both bases, and provide scaling health and mana regeneration to all allied units near it. They also greatly defend the spawn area, blasting intruding enemies with very rapid high-damaging attacks, which grow stronger with each blow, have 25% accuracy, dispel consumables, and disable Blink Dagger, Heart of Tarrasque and other abilities that are normally disabled by player-based damage. Fountains use the same attack priority system as towers, except that they cannot be aggroed immediately by attacking an enemy hero. Fountains are permanently invulnerable, so they can never be destroyed.

modifier_fountain_fury_swipes_damage_increase: Dispellable with death only. 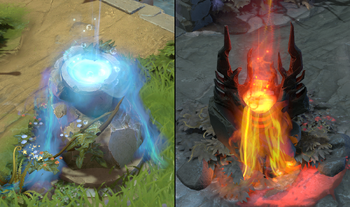 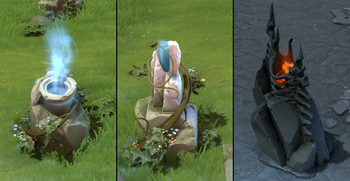 Outposts are buildings located within the primary jungles of both teams, close to the small neutral creep camps on the highground - West from the camp in the Radiant jungle and East from the camp in the Dire jungle. Outposts start out belonging to the team on their side, and can be captured by the enemy after destroying a tier 2 tower. Taking back a stolen outpost can be done without having to destroy an enemy tier 2 tower.

Outposts have a ground vision range of 700 during the day and 700 during the night. Additionally, they have True Sight in a 700 area around them. The vision and True Sight are only granted to the controlling team. Holding ALT displays the vision range, regardless of which team the outpost belongs to. The outposts are always visible through the fog of war, no matter whom they belong to, so capturing them can be easily noticed by the other team, as its animations are visible, and the sound is audible. When under control, outposts can be teleported to with

Boots of Travel, although with a lower teleport radius. Town Portal Scrolls also take 3 seconds longer to teleport to outposts than to any other building. Losing control of an outpost while channeling a teleport does not cancel the channeling. 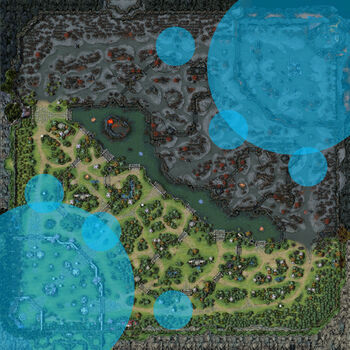 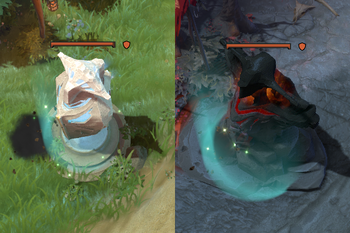 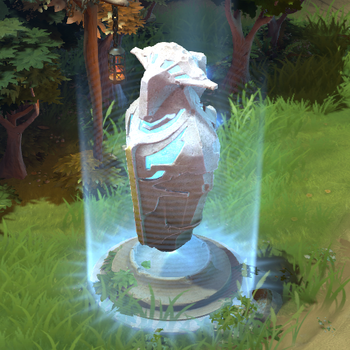 modifier_fountain_glyph: Dispellable with death only.