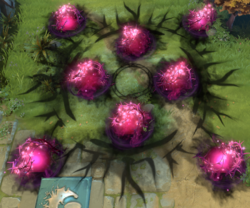 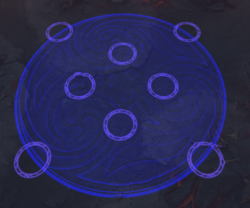 Ability
Target Area
Affects
Enemies
Damage
Magical
Dark Willow creates a maze of brambles that grow in the target area after 0.5 seconds. Enemies that walk into a bramble are rooted and take damage over time.
Cast Animation: 0.3+0.8
Cast Range: 1200 (

Bramble Maze: Dispellable with any dispel.
The fae realm exists all around you, merely waiting to draw you in…

Shadow Realm Buff Attack Logic: Undispellable.
What you can't see will most definitely hurt you.

Ability
Target Unit
Affects
Enemies
Dark Willow casts an ancient fae curse on the target. After a delay, the target and nearby enemies are stunned.
Cast Animation: 0.2+0.83
Cast Range: 600 (

Cursed Crown: Dispellable with any dispel.

Stunned: Dispellable with strong dispels.
Didn't anyone ever tell you? Never strike a deal with a fairy…

Bedlam: Undispellable.
You'll have to excuse my friend Jex. He's really into murder.

Ability
Target Area
Affects
Enemies
Dark Willow releases her pet wisp to terrorize her enemies. After a short delay, all enemies in the target area become fearful and run toward their home fountain. Terrorize cannot be used while Bedlam is active.
Cast Animation: 1+2.57
Cast Range: 1500 (

Debuff Fear: Dispellable with any dispel.
You think you know the first thing about fear? Jex'll show you what that word truly means…