Bonkers is a monkey who accompanies Zharvakko on his journeys. He is capable of speech in his own language. 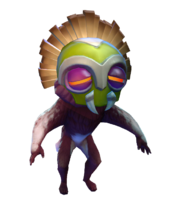 Bonkers wearing the guise of Awaleb.

Originally, he watched the Witch Doctor practice his arts from the treetops, and absorbed the knowledge of his rites and rituals. When he tried to teach his people the ways of the Witch Doctor, he was banished and deemed mad. Now, he rides on Zharvakko's shoulders, throwing coconuts and heavy fruits to aid him in his deeds.[1] Familiar with the traditions of the Witch Doctor, Bonkers performs dances around the his

Death Wards, and rushes to his side should he fall in battle.[2]

When Zharvakko dons the guise of Awaleb, Bonkers is quick to do the same, sporting a ritual mask and matching headdress.[3]