Are We Heroes Yet?

Are We Heroes Yet? is the first part of the official Dota 2 comic written by Marc Laidlaw and drawn by James "Jim" Murray. It is a 7 part comic that spans 48 pages, with each part being released daily, starting on October 31, 2011. The comic was released alongside a large wave of beta invites. 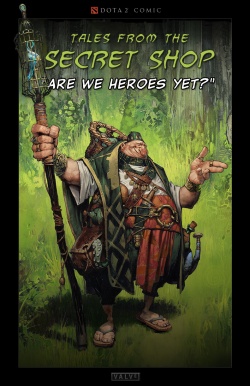 The story begins in a hidden meadow, where the Keeper and his steed Frull begin setting up shop. The Keeper practices his speech, bartering off Eaglesong, Reaver's Axe, and Hyperstone, then raises a large flagpole featuring many humanoid statues with a banner for the Secret Shop. Two thieves, Quirt and Sithil, then appear with malicious intent. Sithil introduces himself and his companion to the Keeper and says that the two lack opportunity for their heroism. The Keeper tells Sithil about Demon Edge, an item that he must obtain before he can open shop.

The Keeper tells the story of Demon Edge, a sword with a hilt made from Direstone and a blade of Radiant Ore. It was forged by Abzidian, and slew him when he attempted to use it. The story tells that only Heroes can control the power within the sword. However, the sword had been broken, and the hilt and blade were separated. The Keeper asks for its return, and offers the assistance of his bird, Roquelaire. He then swats away a mysterious tentacle that emerges from a pouch he carries. Sithil accepts the task, to the surprise of Quirt, and the Keeper releases Roquelaire to guide them, who makes light at one of the statues on the pole. Once they leave, however, the Keeper hints at an unmentioned danger involved.

Sithil and Quirt begin on their way, following Roquelaire, as Quirt tries to discuss why they took the task from the Shopkeeper. Quirt mentions trying to kill the Shopkeeper, when Roquelaire says that the Keepers are favorites of the gods. The story continues, and it's explained that Roshan the Immortal is the only one to have ever killed a Keeper, and had afterward stolen the Aegis of the Immortal. As punishment, he was doomed to be killed repeatedly, and have his treasure stolen time and time again. Roquelaire then mistakenly leads the two into a Kobold Camp. Quirt shows displeasure, but Sithil asks the bird to continue.

Roquelaire tries to remember where Demon Edge had fallen when Drow Ranger appears, along with groups of Creeps. Quirt shows further displeasure at Roquelaire, who explains that they've arrived at the Tarn of Roshan, the resting place of Demon Edge. Roquelaire returns to the Keeper, while Sithil and Quirt begin to look for the sword. Quirt tells Sithil that he doesn't believe in the stories, when Sithil discovers the blade of Demon Edge in a stone. He struggles to remove it while Quirt finds the hilt. Sithil removes the blade, and angers the rock, which turns out to be Roshan himself. Roshan attacks Sithil, and Quirt throws a rock to gather his attention. Roquelaire returns to distract Roshan, and the two escape and admire their loot.

In doing so, Quirt asks to see the blade, when Sithil tells him to stay back from it. The two begin to argue, with Sithil arguing that they should morally return the blade to the Keeper, and Quirt arguing that they owe him nothing. Quirt attacks Sithil, who strikes back and accidentally fuses the sword together, knocking the two down. They take on the appearance of Creeps, with Sithil appearing as a Radiant Ranged Creep, and Quirt appearing as a Dire Melee Creep. The two continue fighting, which draws the attention of more Creeps. A melee breaks out and the sword falls in the river. Quirt dives to retrieve it, and returns to his normal form, while Sithil joins in the battle. Quirt, in confusion, is carried away by the river.

Quirt washes ashore at night near the Secret Shop, but chooses to leave and wait until morning to decide what to do. While leaving the shop, he decides to keep the sword for himself and falls asleep. Soon he wakes, surrounded by creatures, who steal the sword and carry him off back to the Secret Shop. They hold him onto a pedestal and climb on top of him one by one, reforming what was previously the flagpole. The previous top statue returns to an organic form, tells Quirt of his fate, and leaves. By sunrise, Quirt turns to stone, and Demon Edge remains next to the flagpole. The Keeper finds Demon Edge and places it in his shop, and gives the order to Roquelaire to open it.

Time passes, and we rejoin Sithil and Quirt, as normal, in a tavern discussing the tale. Sithil explains how he had to scheme to remove Quirt from his prison, while at the same time escaping death and returning to his own appearance. Quirt still shows trauma from the incident. Sithil orders a round of drinks on him, when Quirt tells him to be quiet and not mention that they're working for the Keeper before swatting away a tentacle that emerges from his pouch.