From Dota 2 Wiki
(Redirected from Accuracy)
Jump to: navigation, search

Evasion is mechanic that allows the unit to dodge an incoming attack. When evaded, the attack gets completely nullified. This means, anything that relies on attacks to hit their targets do not trigger, which includes most attack modifiers, and on-hit effects.

A similar mechanic to evasion is blind. While evasion makes a unit evade incoming attacks from other units, blind makes a unit miss upon attacking other units. Just like evasion, when an attack misses to blindness, it gets completely nullified. 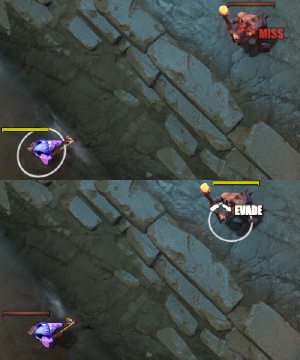 Evasion and blind trigger upon landing an attack, which is on projectile impact for ranged units. If it triggers, the attack does not affect the evading unit at all, so that no on-attack effects are triggered. Upon missing an attack on an enemy, a red floating text appears, reading "miss", visible to the attacking player only. The enemy, who was just missed by an attack, also sees a floating text, but in white and reading "evade" instead. Furthermore, a missed attack does not play any of the attack impact sounds.

The following heroes have a talent that grants them evasion.

True Strike prevents the unit's attacks from missing, negating evasion, blindness and the 25% uphill miss chance for ranged units. It also prevents melee attacks from missing when the target moves more than 350 range away before the attack. Although unable to miss, attack projectiles of a ranged units with True Strike can still be disjointed. True Strike does not work when attacking buildings. However, it works against any other unit, including wards and allied units. 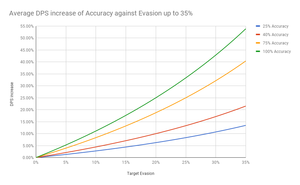 Average DPS increase of Accuracy against Evasion up to 35%

Sources of Accuracy by first definition

Sources of Accuracy by second definition